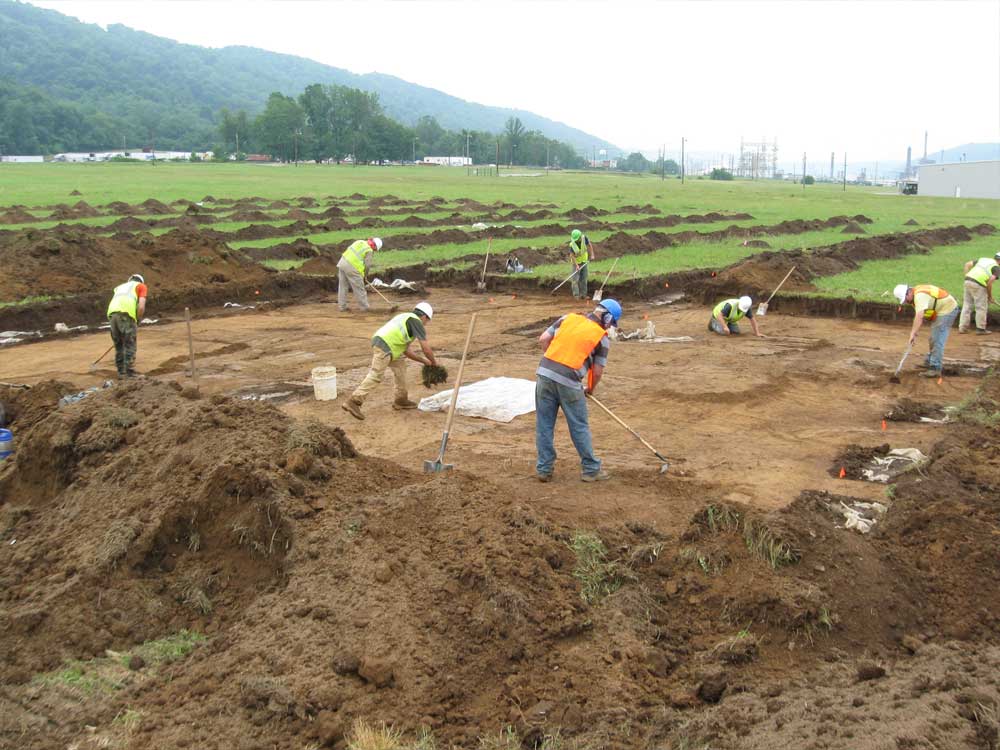 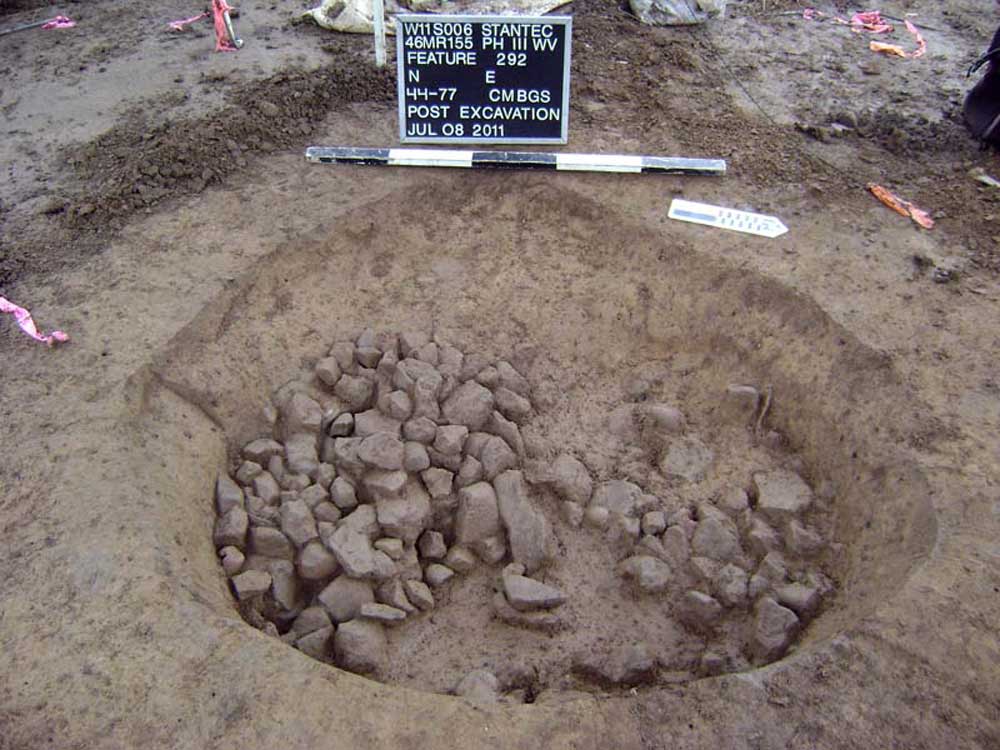 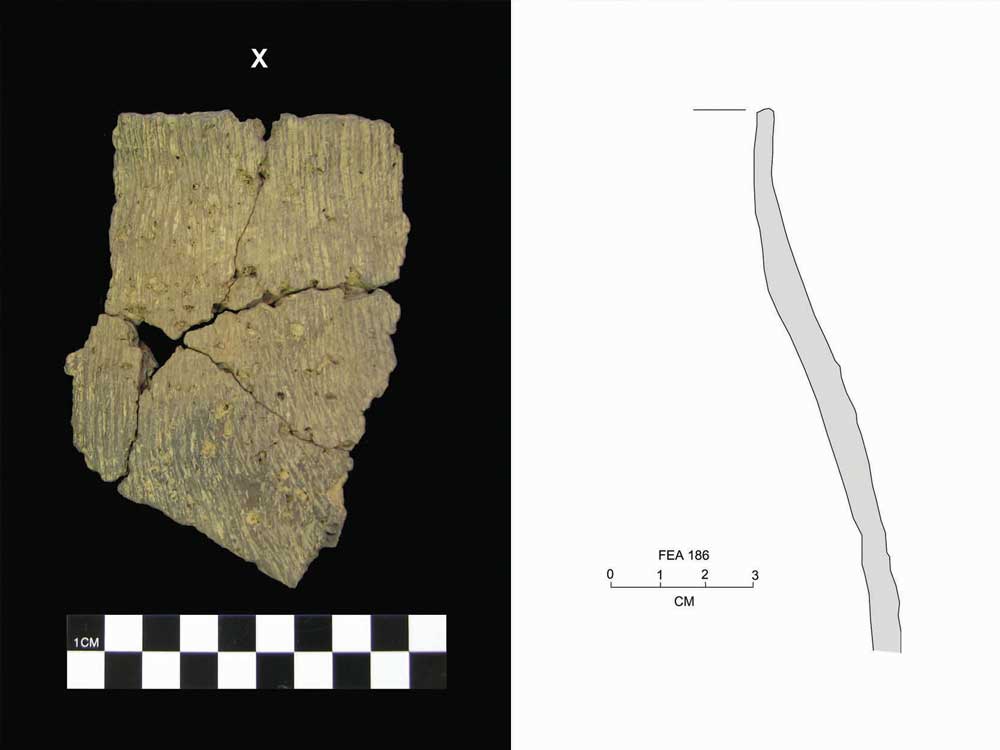 CRA conducted Phase I, II, and III studies in association with a proposed industrial facility on the Ohio River near the community of Natrium in Marshall County, West Virginia. The Phase I archaeological survey resulted in the identification of the Sun Fish Site (46MR155), a precontact Native American site with primarily Late Woodland components. Archaeological survey, evaluation, and data recovery investigations were conducted for Stantec Consulting on behalf of Dominion Transmission, Inc., who provided funding and support for these investigations.

Shovel testing during the Phase I identification survey was conducted at 15-m intervals, and recovered over 1500 precontact Native American artifacts, including debitage, cores and tested cobbles, formal and informal flaked stone tools, groundstone tools, fire-cracked rock, pottery, and burned clay or daub. Diagnostic hafted bifaces from the Late Archaic, the early Late Woodland, and possibly the Late Prehistoric period were recovered. The recovery of siltstone, sandstone, quartz, and chert-tempered ceramics was consistent with the presence of a Late Woodland component, the primary temporal component identified.

The Phase II evaluation of the site’s eligibility for the National Register of Historic Places began with a geophysical magnetometer survey of the portion of the site thought most likely to retain features below the plow zone. Thirty-four magnetic anomalies were identified. These results were transferred to a map of artifact distribution and frequency based on shovel test results. Nine anomalies were ground-truthed with test units, confirming precontact Native American features at four of the targets. These features included shallow FCR-laden basins with carbonized material, and a deeper oven-like pit feature. Carbonized plant remains were recovered from all of these features, including wood charcoal, nutshell, seeds, and bark.

The Phase III data recovery included mechanical removal of the plow zone in a series of meter-wide trenches and at the locations of 11 proposed deep trenches. All of the features exposed in these stripped areas were mapped, with selected strips expanded into blocks based on feature density and artifact frequencies. A total of 182 precontact or potentially precontact Native American features were identified during the combined evaluation and data recovery investigations. We excavated a sample of these features that included 65 non-post-mold features and 17 post mold features, all of them associated with the dominant Late Woodland component. Soil samples for flotation were retained from every excavated feature, with multiple samples taken from larger features in 10-cm levels, and from each zone in multi-zoned features.

One post structure was identified. Structure 1 is a circular structure about 4.5 m in diameter with an apparently screened entrance on the northeast. A celt was found near the center post. Other features include many with large amounts of fire-racked rock in the form of both thermally altered river cobble and thermally altered tabular sandstone. Fire-cracked rock could be found either across the base of the feature, or piled in the center, sometimes overlying a later of charcoal-rich feature fill. Other features were deeper, more cylindrical, and sometimes exhibited truncated bell-shaped profiles with lighter concentrations of FCR. One unusual feature type consists of a dark, U-shaped zone of feature fill surrounding a bright, compact center fill. The dark zone contained organic-rich fill that, upon excavation, revealed a deep red, heat-altered deposit containing charcoal in some but not all areas. Large slabs of sandstone were revealed within this fill, situated either vertically, flat or canted inward.

Subsistence data are derived almost entirely for plant remains; faunal remains were poorly represented. The inhabitants of the site exploited the natural environment for a variety of fruits and nuts, and also practiced gardening, as indicated by the presence of species considered to be cultigens of the Eastern Agricultural Complex (e.g., goosefoot, maygrass, tentatively identified little barley, squash, and the possible remains of sumpweed and erect knotweed), and maize and tobacco.

The Late Woodland material remains are overwhelmingly utilitarian. Hafted bifaces typed as Lowe Cluster and Jack’s Reef from secure contexts are the dominant types. The ceramic assemblage is comprised of rock-tempered, cordmarked, S-twist wares with flat-to-flat- rounded lips, vertical cordmarking to the rim, a lack of decorative elements, and conoidal bases. Vessel form, construction, and tempering are strongly similar to Childers, Watson, and other wares in the Upper Ohio Valley.

Radiometric dates subjected to statistical analysis and correlated with spatial analyses suggest that within the area examined at least three primary periods of occupation dating to approximately cal A.D. 540 to A.D. 640, cal A.D. 680 to A.D. 880, and cal A.D. 780 to A.D. 980/990 (possibly as late as A.D. 1020). Using these temporal data and other lines of evidence, the occupations can be characterized as being of relatively short duration, perhaps three months or less, by small groups. Support for this interpretation includes the lack of clear evidence for formal storage pits, a general lack of superimposed features, and little or no development of organic-rich midden. The size and structural characteristics of the one complete circular structure identified at the site, which is interpreted as a residence, is consistent with an occupation of this duration. The spatial data indicate that the structure of the site or its various occupation loci was open and somewhat disperse rather than nucleated.

Collectively, data from the Sun Fish site indicate a close association, and thus likely interaction at some level, with other Late Woodland groups in the Upper Ohio Valley. Data from the ceramic analysis suggest the closest associations are with Childers phase sites to the south and Watson phase sites to the north. To what extent this indicates actual group-level interaction and heritage is not known. However, it is clear that information from the site provides a variety of data useful for addressing research questions at the site-specific and regional levels, and that these data will be valuable to future generations of researchers working in the Upper Ohio Valley.