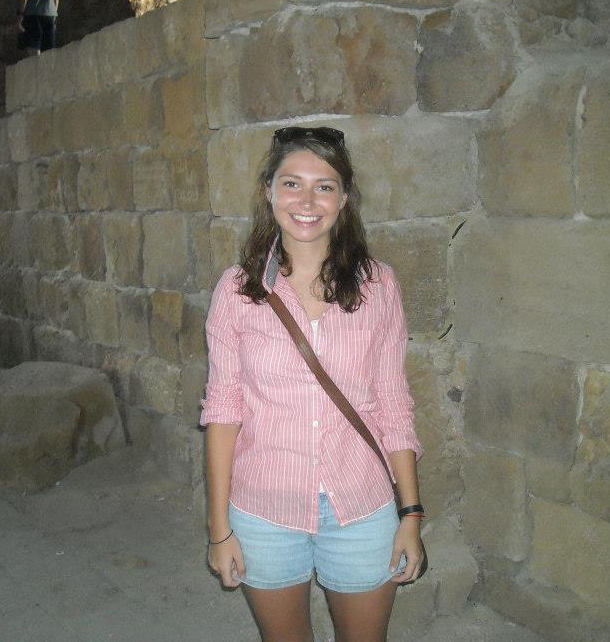 Julia Gruhot is a Lexington native. Her interest in archaeology began at a young age when she observed a privy excavation conducted by the University of Kentucky on Second Street, though she did not initially intend to pursue it as a career. Archaeology came back to her when she was pursuing her Bachelor’s degree at Wellesley College; she studied abroad in Italy and participated in both Greek and Roman archaeological investigations. She graduated in 2012 with a dual B.A. in Ancient History and Anthropology. Afterwards, Julia joined the Apolline Project, a joint venture between Oxford University and Universita di Napoli, excavating a Roman Bath and Villa Complex on the north slope of Mount Vesuvius. She attended the field school and returned the following year in a supervisory position. At the same time, she conducted graduate research in Near Eastern Archaeology at the American University of Beirut in Lebanon. In 2014, Julia was accepted into Cornell University’s Institute of Archaeology and Material Studies Master’s program, where she focused her research on social and cultural complexity and network and systems collapse in the Ancient Near East. While with Cornell, she helped organize and coordinate excavations for the Kalavasos and Maroni Built Environments (KAMBE) Project field excavations and field school in Cyprus.

Julia joined the CRA team in 2016. She began as a field technician participating in numerous Phase I reconnaissance, Phase II NRHP eligibility testing, and Phase III data recovery projects and has gained experience in a variety of skills related to CRM archaeology. She has participated in Phase I survey in Indiana, Illinois, Kentucky, Mississippi, Ohio, Tennessee, Virginia, and West Virginia. She has also worked on Phase II and III excavations in Indiana, Kentucky, and West Virginia. In 2017, her responsibilities expanded when she became an Archaeological Field Supervisor and Staff Writer. She has conducted the documentation of prehistoric and historic sites, as well as authored, co-authored, and contributed to numerous survey and excavation reports. In addition to conducting archaeological fieldwork and preparing technical reports, Ms. Gruhot’s responsibilities also include archival research and laboratory support.

She enjoys hiking (both professionally and recreationally), rock climbing, exploring, getting a little lost, playing trivia, cards, and board games, and eating fabulous food.